I went back and forth on this race.  It benefited the Farm Animal Care Coalition of Tennessee and the Veteran’s Recovery Center, and I really wanted to do it but I didn’t want to miss the 11 mile run with my training group.  Finally, M convinced me….really, all she had to do was show me the cowbell finisher medal…I’m a sucker for a medal…or cowbell…really, anything at the finish line.

We decided to take advantage of early packet pickup so that we could sleep in if we wanted.  Finding packet pickup was a bit of a challange.  It was at the FACCT office which I now know is located just behind my hair salon.  I pulled up, expecting the typical signs and tables but only found two cars parked in front of an office complex.  After scoping the place out, I noticed a piece of paper taped to one of the doors.  Sure enough in very small print, it said packet pickup!

I walked into the empty office and after a couple of seconds, a woman came down the hall.  She was excited that I was there for the race and had me come to one of the back offices.  I knew this was going to be a small race when all of the race packets (goody bags included) fit on a single office desk.

The race was at the MTSU dairy, and while I work at MTSU, I have never been out to the dairy.  After following some rather unsual directions “go .5 to .6 miles to the one lane bridge” and driving up some rather steep hills (which we found out were also part of the race course), we found the parking area.

After seeing the hills we would be running I decided not to go for time and ended up having a great time running with a friend I ran into.  The race course was beautiful!

For a first time race, it had excelent course support…and of course, there were cows! 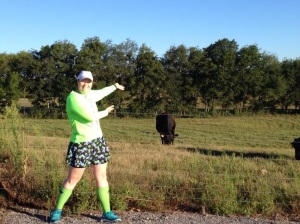 I was super excited to find beef jerky and fresh chocolate milk (from the cows we ran by…the chocolate milk, not the jerky) at the finish line!

I was 6th in my age group and would have probably have placed 3rd had I really pushed it.  They only gave awards 2 deep though and if I had worked that hard to place 3rd and not received an award I would have probably been “bitter party of one” so I’m glad I took it easy and just had a good time.

M totally rocked it in her awesome cow pants and got 2nd place female overall!

I will definitely do this one again next year!